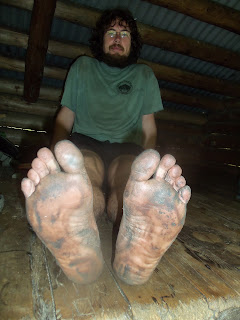 I asked him to pose like this for me, because we could not believe his feet.  PJ's has hiked all of the way from Springer Mountain, Georgia in a pair of Teva sandals.  His trail name is PJ's because way back down south, when the weather was cooler, he had a pair of pajama pants he would wear around camp when he was cold. 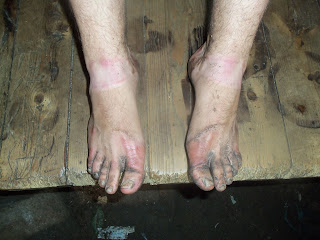 Not only were his feet muddy, from all of the recent rain, but they were rubbed raw in several places where the nylon straps rubbed his feet.  It just hurt to look at PJ's feet.  He never had a problem with the sandals, he said, except when he kicked rocks.
We also noticed this on the trail today: 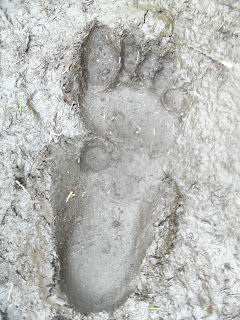 No joke - someone is hiking barefoot.  There were two sisters who did this a few years back, and they wrote a book about it - "The Barefoot Sisters."  As a matter of fact, they had done what is known as  "yo-yo" hike - they had started in Maine, and then when they reached Georgia, turned around and hiked back to Maine.  I only hope that we get to catch up to this mysterious barefoot hiker.
Today we finally hit level trail after one nice small mountain to get over, called Little Boardman Mountain.  As Keith predicted, I felt my very worst when I woke up.  Although the trail was really nice today, and beautiful, I just could not enjoy it at all. 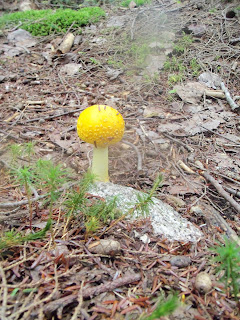 We  stopped for lunch at the prettiest shelter yet, named Cooper Brook Falls Lean-to.  It sat right next to a beautiful waterfall that flowed into a gorgeous swimming hole with crystal clear water.  Keith made me more hot chocolate at lunch, and once again, that helped for a short while.  My throat just made everything miserable for me today. 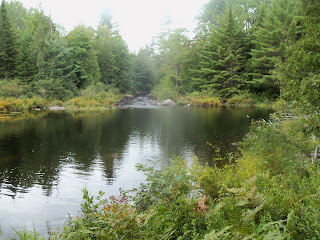 While we were eating lunch, a very brave mouse showed up at the shelter.  He was very tiny, with abnormally large ears and large, black, beady eyes.  He was really quite comical.  He stood in front of me, and looked up, blinking, as if to say, 'Okay, what did you bring me?"  I couldn't help but laugh at how brave he was.  I opened up a small container of Jif, and you could tell he smelled it right away.  Before you knew it, he had climbed up the side of the shelter and was sitting right next to me!  He was acting like he was going to jump up in my lap, so I shooed him away, and he ran back down to the ground.  I scooped out the peanut butter, and put the empty container on the ground, hoping to occupy him so I could quickly eat without him trying to get in my lap again.  He proceeded to work very hard at licking the peanut butter out of the cup, which was pretty enjoyable to watch, because every now and then, he'd stop and try it get it off of his little paws, and it seemed like he was trying to get it off of the roof of his mouth.  Hilarious!
As I was watching his antics, quite amused, all of a sudden, a chipmunk showed up and chased him off.  You could tell the chipmunk knew exactly where the mouse lived, which was under a large rock about 10 feet away.  Apparently, these two were used to battling over hiker's handouts.  It was surprising when the mouse didn't actually run for his hole, but instead stopped short and hid under a dead branch.  The chipmunk, however, was tricked, and thought the mouse was in his hole, and he would stand just outside the mouse home, blocking the way.  In fact, the mouse had come back out from under the branch, and was over licking up the peanut butter, out of sight of the chipmunk.  The smallest creature had won out.  While the chipmunk thought he had the mouse cornered, the mouse was actually feasting on Jif.  We watched them for a while before heading on out. 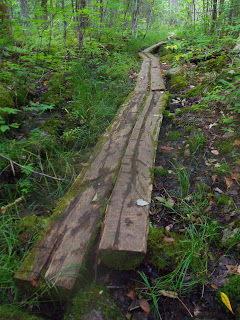 The trail the rest of the day was more like a logging road, level and easy to walk on, all of the way to the shore of Jo-Mary Lake, where we camped at the Antlers Campsite.  The wind was picking up and getting very cold as the afternoon went on, and although we made great time, and reached camp by 4:00, the wind coming off of the lake was really cold and blowing hard.  We got in the tent and zipped it up tight to stay warm.  Finally, tonight the heavy sleeping bags felt great!  We were treated to a gorgeous sunset and sunrise, and that night the stars were as clear as I'd ever seen them - just breathtaking. 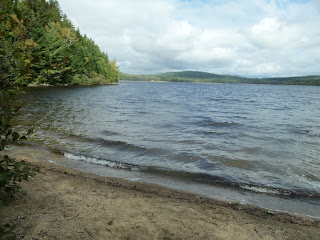