Out of the 100-Mile Wilderness! 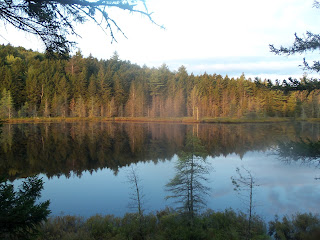 After a really peaceful night, we woke up, and Keith slipped down to the pond very early, hoping to see a moose.  There had been moose droppings all over, so we hoped we would see one.  He did not have any luck, and came back pretty quickly.  I was amused, because as he came back up the hill from the pond, the red squirrels, who are very territorial, angrily chattered at him as he approached their section of the trail.  I heard them chatter the whole way, one after another, as he approached the tent.

We quickly ate and packed up, hoping to get an early start on this day, because we knew if we made good time, we could reach Abol Bridge Campground, which was the end of the Wilderness.  There was a camp store there, and we had recently heard that they had opened a restaurant, and that it had only been open for a week!  What great timing!  They also had showers at the campground!  It all sounded really good.

We followed one beautiful stream after another today, and with each one, Keith was kicking himself that he had not brought a fishing rod.  He said that was one thing he would do differently.  If he had only known Maine was going to be nonstop ponds and lake and streams, he would have planned time to fish through the Wilderness. 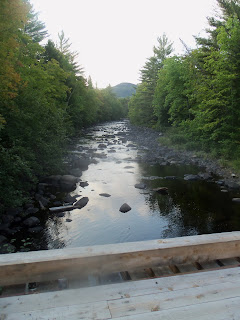 At one point, we reached a side trail that said it went to Rainbow Lake, with a view of Mt. Katahdin.  it was only .2 of a mile away, so I went over there to see it.  I had been told by a friendly dayhiker that this was a view I would not want to miss.  When I reached it, there was a small boat there, and a man who worked for the Maine Nature Conservancy had just arrived in it.  I visited with him, and found that his job was to maintain the lakes that were within his region, which included 50,000 acres.  He got from lake to lake by seaplane!  What a job he had!  He walked around some, and picked up any trash he could find (not much, as this was in the middle of nowhere), and then went back out on his boat.  The view was gorgeous, as promised: 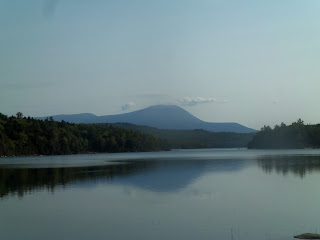 We hiked on, following another beautiful stream, and more ponds with huge rocks in them.  These ponds were all formed from glacial activity, and the rocks were left behind as the glaciers advanced and retreated.  The ponds were all crystal clear.  We reached some small hills that were topped by smooth rock, and met a thru-hiker sitting there, studying his AT Guide, who was very, very quiet.  We tried visiting, but he was a man of few words.  As I was talking to him, I looked behind him, and caught another beautiful view of Katahdin. 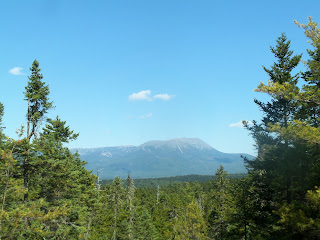 We were getting closer and closer, and it was hard to believe that in two days we would be on top of that mountain, and then heading home.  I kept looking at it, trying to imagine what the climb would be like, and it looked a lot like the mountains in the White Mountains of New Hampshire to me, which meant it would be tough.

As the day ticked by, I picked up the pace more and more, and the guys hurried also.  I was really anxious to reach the camp store and get cold medication, throat lozenges and something icy cold to drink.  My throat was better, but it still hurt.  We finally came out of the woods, on to what is known as the Golden Road, a really long gravel logging road in Maine.  We walked down the road a while, and then crossed over Abol Bridge, which crosses the Penobscot River.  There, on that bridge, was the prettiest view yet of Katahdin. 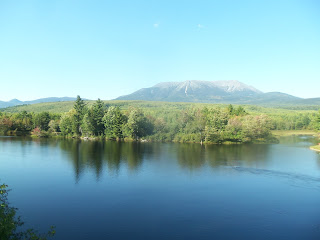 We came down off of the bridge, and there was the campground!  We had made it out of the Wilderness in 6 days!  We joined a group of thru-hikers that were gathered under a canopy out on the edge of the parking lot.  Everyone was in a celebratory mood, and hikers had already brought beer and snacks out of the camp store and were sharing them with everyone.  Every once in a while, another hiker would come in off of the road, and we'd all cheer for them.  After we were there a while, the very quiet hiker from earlier in the day arrived, and sat across from me, without saying a word.  He also never made eye contact.  We would meet kids like this from time to time, and you can't help but want to hang with them for several days, get them to open up, to assure yourself that they are okay.  Most of these young hikers are out here alone.  After a while on the trail, though, most learn to fit into a group, and travel together.  I found out his name was Silent John.  Someone had named him appropriately, it seemed.  He was from Connecticut,  and when I asked him if he was excited about finishing the trail, he said he wasn't sure.  I never did get much more out of him.  He stayed there and wrote in his journal for a very long time, and later on, ended up pitching his tent just a couple of campsites away from ours.  Later on, I learned that I had managed to talk to him more than most people had on the trail. 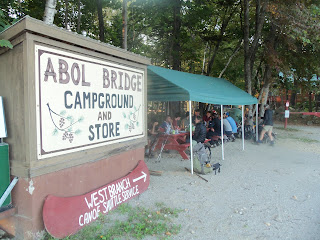 A park ranger was there, and he was giving us all instructions on the best place to camp in Katahdin, and instructions we needed to follow to climb Katahdin.  Huff and Puff had already reserved a shelter at the Katahdin Stream Campground in Baxter State Park, and asked if we wanted to share it.  There was a possibility of there being too many hikers for the number of tent sites available, and so we jumped on the chance to share a shelter, because we wanted to make sure we had a place to sleep the night before our summit.

The restaurant was closed on Wednesdays (what luck!), but the young man that worked at the camp store came out and offered to make pizza for everyone, even though the restaurant was closed.  He just kept making pizzas, and the hikers kept eating.  After we all ate our fill, and enjoyed visiting, we went and picked out a primo campsite right on the banks of the Penobscot River, with an awesome view of the mountain we would be climbing soon.  It was a beautiful sunset.  We hit the showers, and they were awesome - very clean, and very hot!  What more could we ask for after a week in the Wilderness? 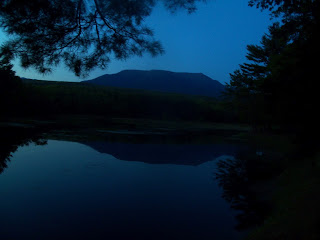 Swamprat hitched a ride into the nearby town of Millinocket to meet Dania at the hotel that she would be arriving at on that same day.  She would be bringing him back to the trail in the morning, and then the three of us would slackpack the nine miles to Baxter State Park while she kept our packs in her rental car.  She would then meet us at the other end in Baxter.  It was going to be an easy, awesome day of hiking tomorrow!
Posted by Keith and Linda Geraghty at 9:27 PM