Our First View of Mt. Katahdin!

It rained pretty steadily for a while last night, but stopped well before morning.  About 30 minutes after we all went to bed, there was a large crack, and then you could hear a very large limb as it was falling from a tree.  This was a sound that we had heard before on this trip, and we both held our breath and braced ourselves. When it finally fell, it sounded like it landed over by Swamprat's tent.  He was about 50 yards away from us.  I yelled over to him, to check on him, and he was fine.  He said the limb had crashed down about 25 feet from his tent.  Too close for comfort!  He said, "Man, when I heard that crack, I held my breath and prepared myself for the worse!"
We had made it a habit to check for dead trees or branches above our tents whenever we chose a camping spot, because we were used to hearing limbs and trees come down in the woods, and never wanted to be a victim of that.  What a terrible way to end a hiking trip.  None of us had noticed any dead branches around, so the falling limb was a surprise.
I ended up having a miserable night, waking every hour or 2, to try a different form of medication, or drink cold water.  My throat was really sore, making swallowing a miserable experience.  It seemed that the more I tried to NOT swallow, the  more I needed to swallow.  In the morning, Keith made me some hot chocolate, and that helped some, although only temporarily. 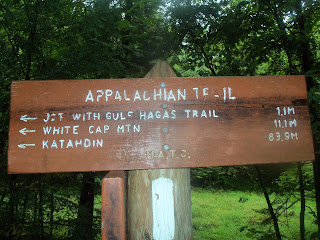 We had a pretty tough day ahead of us, with four sizable peaks to climb, but we also knew that we would see Mt. Katahdin today for the first time, from the top of one of them.  We had about 4 miles of very easy gradual climbing before we hit the real mountain climbs, so we got that done fairly quickly.  When we finally reached the first mountain, Gulf Hagas, we enjoyed seeing some of the rock work that the trail crews had done.  As a matter of fact, today we saw some of the most impressive rock work to date.  Just massive rock steps that went up the mountain for a very long way.  This sure made the climbing better.
After we topped Hagas, we came to a Campsite that someone had left trail magic at - a large tupperware container full of homemade Molasses cookies.  Keith said they were delicious.  We also met a couple that were doing trail maintenance with weedeaters, and we were impressed at what a great job they were doing - clearing the trail really wide, and their weeding eating went on for a very long ways up the trail.  Today, we had been blessed with beautiful weather, and we met some southbounders who they told us the view from the top was amazing.  This was great news, as we were anxious for that first view of Katahdin!
We made it over Hay Mountain, and then start climbing up White Cap Mountain.  It also had impressive rock work, which helped immensely.  I was feeling badly, and couldn't keep up, and told the boys to go ahead, that I would meet them at the top.  They hurried on, anxious to get up there, and before too long, I caught up to them.  Keith told me, 'You can see Katahdin from the viewpoint."  There were some other thru-hikers there, among them, PJ's, Detour, and Easy Rider.  PJ's had actually worked at Baxter State Park before, and knew Katahdin very well.  He had pointed it out for Keith.
(The long flat mountain right in the middle of the photo below is Mt. Katahdin). 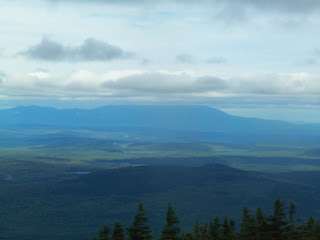 Keith took me over to show me which one it was.  We had just passed a sign at the bottom of White Cap that said Katahdin was 83.9 miles away, so I expected to barely be able to see it in the distance.  As it turns out, it was the mountain that was closest to us!  It just did not look that far away.  It turned out that the trail wound in and out, around so many ponds and creeks between us and the mountain, that the trail was 83.9 miles long!  Hard to believe. 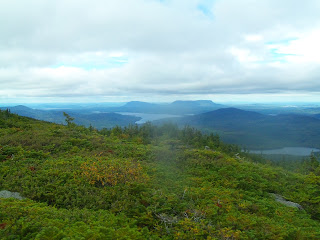 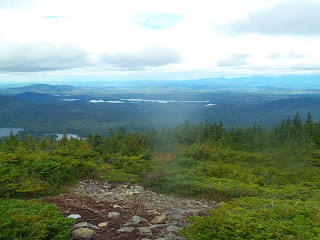 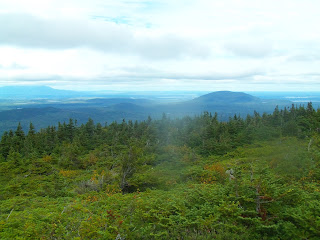 We moved on, anxious for the reward of downhill that was so nice after climbing all day.  We reached a shelter that a lot of familiar hikers were at - Jaybird, Pancakes, Mr. Noodles, Easy Rider, PJ's, and Detour, to name a few, but we didn't find any real level sites, and there was a river up ahead, so we hiked on, hoping to cross and find a nice campsite near the stream.  As we approached the river, we could hear Mr. Noodles giggling on the river banks.  He had brought a pack rod, and was catching trout right and left, giggling like a small boy.  Pancakes was right there with him, and they  were really enjoying the fishing, and were going to have fresh fish for supper.
Swamprat found us a great campsite, and we quickly pitched camp and turned in, as it had been a long, hard day.  It had been another miserable day for me, but Keith had mentioned earlier in the day that the third day of his cold had been the worst.  That would be tomorrow for me.  I went to bed praying that mine would be better tomorrow instead of worse.  I used up the last of Swamprat's cold medication. 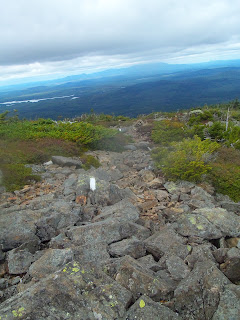 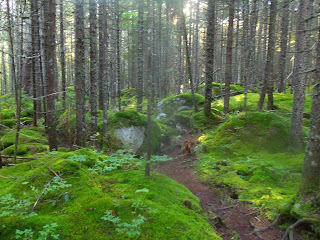 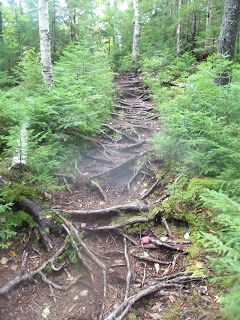 Posted by Keith and Linda Geraghty at 11:05 PM