Getting Sick in the 100-Mile Wilderness

Believe it or not, I have tried to keep the whining to a minimum throughout this blog.  After all, I did CHOOSE to do this trip, so I shouldn't really complain about the discomforts involved.  We all knew that getting sick on this trip was a real probability, but luckily, so far, we have only had mild colds early on - nothing really too serious, and we have all felt very lucky to be spared the stomach viruses and serious injuries that seemed to affect everyone else on the trail.
When we left the White Mountain Inn in Gorham weeks ago, Swamprat ended up getting sick with a sore throat and cold.  There was a group of younger hikers there who were sick, including Mary Poppins, whom he had shared a room with.  Swamprat had been pretty miserable for a few days before it improved.  Then, about 7-10 days later, Keith came down with it.  As much as we tried, we had done everything we could to avoid getting it, but it found its way to Keith.  After Keith got sick, I remember counting up the days, and I thought to myself, "In about 10 days, we'll be entering the 100-Mile Wilderness.  I really hope I don't end up with this cold in the Wilderness."  I even thought about picking up some cold medication and sore throat lozenges just in case.  Too bad I didn't follow through.
About 4 a.m. this morning, I woke up with a pretty bad sore throat.  Yes, it seemed that my time had finally come.  I had never picked up any sort of medication in town.  All I had with me was aspirin and Ibuprofen.  I took aspirin and went back to sleep, hoping that I would feel better when I woke up.
When we woke up, the sore throat was about the same.  It looked like it might rain.  We hurried and ate, packed up everything, and went down to the nearby stream to get more water.  While we were down there, a chipmunk had climbed on to Keith's pack, which was still back at the campsite.  It had nibbled on a large ziploc bag of Quaker Oats Granola Bars, tearing the packaging on one of the bars.  When we returned, Keith discovered this, and decided to throw out that granola bar.  He simply laid it down on the ground so the chipmunk could claim it.  The chipmunk ran over, and grabbed the entire granola bar in its mouth, running around with it hanging out of the side of his mouth, dragging on the ground.  It was quite amusing to watch.  Then he stopped, and repositioned it, grabbing it exactly in the middle, balancing it perfectly, so that he could run back home and store his treasure.  I got the impression that this chipmunk had run with granola bars in its mouth before.  The chipmunks and red squirrels never failed to amuse us.
We began hiking, and still hoped to climb up and over the mountain before it rained.   A heavy mist was hanging in the air, and it was as if we were hiking through a cloud.  We could certainly forget about any views or photos until this lifted. 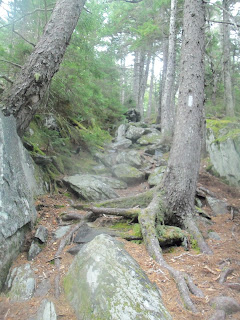 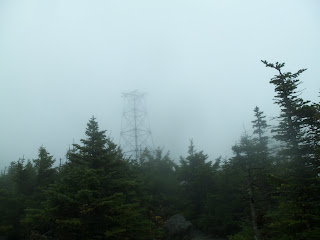 As soon as we got to the top of the mountain, and out of the trees, it began sprinkling.  We put on our rain jackets, and our pack covers and continued on.  It never rained hard, and it stopped before lunch time.  We crossed over the Barren Ledges, which normally would have provided great views, I'm sure, and then over Fourth Mountain, and Third Mountain, and then finally Chairback Mountain.  The tops of them were all smooth rock, and had small ponds now full of water, and we could not help but get wet feet now and then, and do our share of slipping and sliding.  We finally hit a little bit of lower,  level trail closer to supper time.  We passed a couple of campsites that were already taken by some other thru-hikers, and then arrived at West Branch Pleasant River.
We had to ford this river, but it was quite shallow.  The AT Guide warned that it had a slick rocky bottom, but we really didn't have any problems slipping as we carefully made our way across.  As the day passed, I had began to feel worse, and couldn't wait to set up camp and lay down.  The AT Guide also warned that there was no camping for 2 miles on this side of the river.  There was no way I could go 2 more miles, so  we walked about 200 yards down the trail before we found a great campsite right on the banks of the river, and about 100 yards off of the trail.  We had not seen a ridgerunner in a long time, and I only hoped that one didn't pass by, now that we were camping illegally.
My throat had continued to get worse as the day went on, and by now, swallowing was really painful.  It was not going to be a fun night.  Before we all turned in, I asked  Swamprat if he had any kind of cold medication left from when he was sick, and he gave me all he had - about a dozen Advil cold medicine tablets.  I took two and hoped for the best, just as it began to rain. 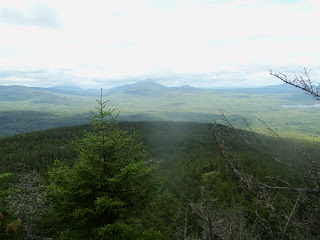 (Camped at Mile 2100, on the banks of the West Branch Pleasant River)
Only 84.2 miles to reach Mt. Katahdin!

Posted by Keith and Linda Geraghty at 10:14 PM