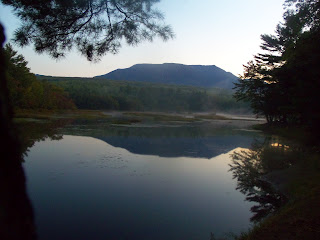 We woke up, ate breakfast, and headed to the nice, hot showers again.  I had not washed my hair yesterday, although I was dying to, because I didn't want to get chilled.  It was still chilly this morning, but my plan was to wash my hair, and then go loiter in the camp store, drinking hot coffee, and letting my hair dry in there where it was warm.

The shower was divine, and the coffee was even more so.  The man in the store was very friendly, and I think he was happy to have some company.  He let me loiter all morning.  When the sun finally came up pretty good, I went and sat in it out under the canopy where we had all gathered the day before.  The sun felt so good.

As I was sitting there, I was watching a lady who was camping in a RV right down near the river by the bridge.  All of a sudden she grabbed her huge camera, and began running for the bridge.  I wasn't sure what she saw, but I wanted to see it also, so I ran for the bridge as well.  When I got up there, I ran to where she was, just in time to see her taking pictures of two beautiful bald eagles, just as they flew over the river, and right in front of Katahdin.  What a perfect morning this was shaping up to be!  We chatted a while.  They come here every year to camp.  Her husband fishes while she takes pictures.  Yesterday morning, she took a photo of a bull moose right across from where our tent was.  Too bad we missed that!

I was waiting until the restaurant opened at 11, because I was going to be first in line for a good, hot lunch.  Keith came over after he showered, and joined me in my vigil.  Soon, there were about 10 hikers waiting with us.  Everyone was going to eat lunch, and then hike on to Baxter State Park, which is where Katahdin is located.  After we ate, Dania and Swamprat showed up, and we loaded our packs into her car, and hit the trail.  The trail was particularly beautiful, following the Penobscot River for a ways, then stream after stream, then several waterfalls, and finally some beautiful ponds, right before we reached Katahdin Stream Campground, where we would be camping tonight. 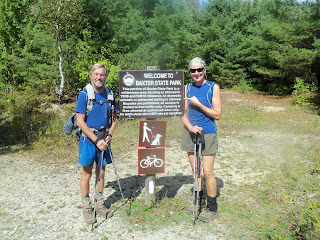 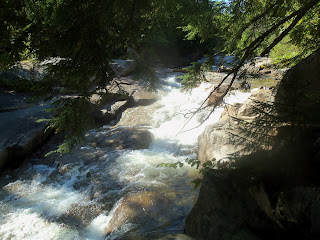 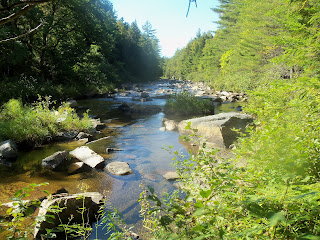 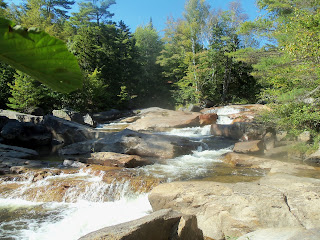 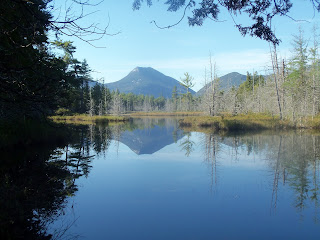 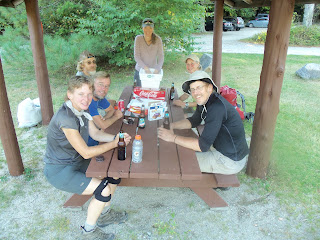 When we reached the campground, Dania was there with coolers of beer and Coke, and she had snacks.  Other hikers joined us, and we had a little celebration.  Big Foot and Big Naranja were there, and they had summitted that day!  Huff and Puff also joined us.  They would summit tomorrow with us.  Later, Ninja Kindle walked up, and he had just come down from the top!  We then hiked over to the park office and registered with the ranger as thru-hikers.  Keith and I were number 413 and 414 northbounders for the year.  It was good to be official!  We were also invited to a celebration tonight at 7 at the Birches Campground.  We were told to bring a bottle cap and spork, and our book of matches we got in Georgia.  I told him we had never gotten a book of matches, so the ranger gave me one, and it said "Georgia Appalachian Mountain Club" on it.  We checked out the log book at the ranger station, and saw many familiar names that had already summitted - among them, Lighthouse, and Secrets and Shenanigans.

We found out that there was plenty of room for us to have our own shelter, and so we ended up camping just 2 shelters down from Huff and Puff, and everyone had plenty of room.  Dania and Swamprat headed back to their hotel in Millinocket, and at 7, we headed down to the Birches Campground with Huff and Puff.  There about 15 thru-hikers gathered at a nice campfire, and when the park ranger showed up, he brought two cakes, a container of peaches, and whipped cream.  Another hiker had brought a watermelon and strawberries. There was a section hiker there, named Bahama, who had been hiking the AT in sections since 2005, and tomorrow he would finish the whole thing.  All of the other hikers were all northbounders, like us, who were finishing their hikes tomorrow.  Bahama  brought a very nice bottle of rum, and asked everyone to get out their bottle caps, and we all used those for shot glasses to make a toast.  When the time came, the ranger asked those who had brought their books of matches to come forward, so we did, and we lit candles on the cakes.  As it turned out, we had never met this ranger in Georgia, but some of them had, and he had given them matches way back then, and asked them to bring them to Maine, and look for him.  He had planned to do this way back then!  The cake, topped with peaches and whipped cream, looked amazing.  The watermelon and strawberries were scrumptious, especially since fruit was something we never had on the trail! 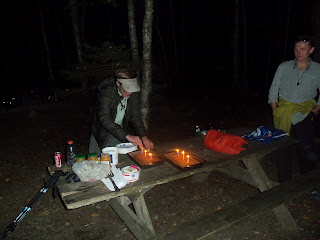 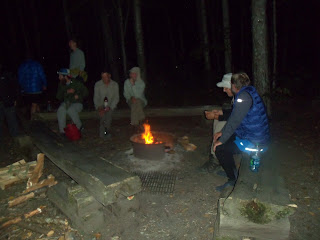 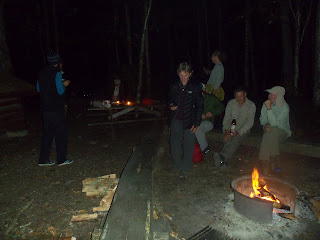 It was just a really neat little closing ceremony for the whole AT trip.  It was a really great group of folks.  We had hiked with them all, at one time or another.  Some we had met as far south as Georgia, and some we had only met in the past few weeks.  We shared really great stories of our experiences, stories of other hikers along the way, and compared notes of where other hikers were.  Everyone hoped that Boots and Melody would come walking in.  We really did expect to summit with them, and wondered how close they were.  The hikers that were with us tonight were Kindle Ninja, Big Foot, Big Naranja, PJ's, Detour, Easy Rider, Huff and Puff, Bahama, Trekking Pole, Claudia Van Damme, Deep, Mr. Noodles, Hopper, and a few others.

The younger hikers were planning to get up at 2 in the morning, and head up the mountain, hoping to summit at sunrise, which would be at 6 a.m.  I couldn't imagine hiking up it in the dark!  But I'm sure the sunrise would be amazing.

We made out way back to our shelter to get a good night's sleep.  We had planned to meet Swamprat and Dania at 7 in the morning to begin the hike up to Katahdin.  The weather was supposed to be PERFECT!

Posted by Keith and Linda Geraghty at 10:13 PM


Please provide me the email id of webmaster of your website: http://www.keithandlindasexcellentadventure.com/