If you remember, earlier in this blog, I mentioned some advice which we were given  by Bman back at Low Gap in Georgia, when he was encouraging us to finish this journey.  He said that once we reached the Whites of New Hampshire, we had made it to the playoffs.  Well, we have reached the Whites - rather exciting, and intimidating, all at the same time.  We have spent many conversations trying to convince ourselves that it can't be much worse than any other mountains we've climbed so far.  WRONG!
I am actually just now writing this, 2 days after we climbed that mountain, because I've been too exhausted - and also a bit busy running around with resupply activities - but mainly exhausted.
We had ended up camping out in the yard at the Hikers Welcome Hostel.  We have not stayed at any of these type of hostels, which the "younger hikers" favor, mainly because we had stopped into a few and could tell there was absolutely no regulations for cleanliness being followed.  We had also heard of a few farther south where the hikers all got stomach viruses.  We really just didn't see the attraction to stay at them.  However, this one advertised shuttling you through the Whites, which would allow for slackpacking, which would make things SO much easier.  Once we arrived, we decided to camp in the yard, because there was one bedroom with bunks, and it just didn't appeal to us.  We had a very noisy night in the yard, mainly because of traffic on the road nearby.  We also found out that the rates they charged for shuttling were really high, and made the decision to just backpack through the Whites, full packs and all.  When we got out of the tents that morning, it was 49 degrees - coldest it's been in a while.  I slept really chilly, and was glad we were getting our "winter bags" back today from Keith's parents.
We started the trail that morning (the 8th), and knew we only had a 9 mile hike.  Normally, we hike at least 15,so right away, this put our mind at ease, expecting we should be able to finish early.  Keith's parents were going to be meeting us again, so we looked forward to getting done early, and having time to spend with them.
The first 2 miles of the trail were very easy, just very gradually gaining elevation, even following a road for about a quarter of a mile.  We passed several beautiful streams, and a shelter, remarking at some of the great campsites we could have stayed at here by the stream, instead of the loud hostel we chose. 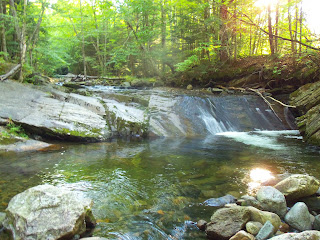 After 2 miles, we reached a sign that said it was 3.7 to the summit.

This is where we put on our game face.  We began climbing much more aggressively, but never getting too steep.  The trail never got too bad, which means no climbing required, and we took a couple of breaks on the way up to catch our breaths and drink plenty of water.  As we climbed, through the trees we could catch glimpses of how high we were getting, and you could tell the view would be awesome.
I needed one more "catch my breath" break right before the top, but the boys did not, and they were anxious to get up there, so they climbed on, and I sat and ate a granola bar, letting my shaking legs get a rest.  Once I got up and started climbing again, I was amazed at how close to the top I had been.  I just couldn't tell because of the trees.  I reached a side trail, and the sign said, "South Peak, .1."  I yelled for the guys, but they didn't answer, but I knew I didn't want to miss even one view, so I took it, and soon caught up to them.  At this peak, the view was incredible.  Keith pointed out to me a even higher mountain nearby, and said, "That's the north peak."  Uh-oh.

No one told me about two peaks!  I thought we were at the summit.  However, you could see the trail that led up to it, and it really did not look too bad, so after taking lots of photos, we headed up that trail to the REAL summit. As we went, we soon left the treeline behind, and the trail began being marked by cairns, these stacks of rocks that the hikers gradually add to as they go by.  Some are quite tall.  I don't know why, but I LOVE the cairns.  When given the choice between a picture of scenery or a picture of scenery with a cairn in front of it, I always include the cairns.  The trail that left the North Peak and headed down the mountain had quite a few cairns on it, and it was stunning!

It was the most beautiful day to be up there, and it was just warm enough to be comfortable in short sleeves.  When a cloud would pass over, I'd want to put on a long sleeve, but then the sun would come out just in time, and warm it up.  We joined about a dozen other hikers who were lounging in the sun and eating lunch.  Soon, a Coffee to Go showed up, as well as Relative, another thru-hiker we had met last week.  It was Coffee to Go's 26th birthday yesterday, and that explained how we had gotten ahead of him, because he and others had been partying at a shelter for two days.
After we ate lunch, and took more photos, we started down the mountain.  We checked the time, and it was still early, only 1:30, and we knew we only had about 3.5 miles to go to reach the parking lot.  We were happy to be able to end the day so early.
As we started down, we met quite a few dayhikers on their way up, and would stop and chart.  Hikers usually ask you where you started from, and when you reply, "Georgia," it's always fun to watch their reactions.  After about a mile, the trail got much rockier, and showed us down, and in another half a mile, it got very steep, and soon, we were very cautiously easing down from one huge rock to another.  We reached some steep rock faces that had wooden steps mounted on them, but the steps were so small and far apart, that I was taking them VERY slowly and cautiously.  One wrong step here, and you were falling a ways.
As I was easing down these steps, and praying very hard, Einstein and Coffee to go came up behind me, and I stepped aside when I reached a spot that I could, so they could pass.  They ran down the steps like it was a normal staircase.  I couldn't believe my eyes.  Oh, to have 26-year old knees again!

It was very slow getting to the bottom of Moosilauk.  I didn't think the downhill would ever end.  For the last mile or so, a stream followed the trail, and it turned into a beautiful waterfall, with cascasde after cascade, and water falling down steep rock faces.  It was just awesome!

Just a about the time, I thought I should probably take another "sit down" break and rest my legs, the trail began leveling out, and we could tell we were near the bottom, so we kept going.  Before you knew it, we caught a glimpse of the parking lot, and soon saw Keith's parents there, already waiting on us.  We were so happy to see them!  They brought trail magic, in the form of cold drinks and Ring Dings, one of Keith's favorites.  We couldn't get the boots off fast enough, and climbed into the van, and headed to Lincoln, where we would be zeroing and resupplying.
We stayed at a really great hotel in Lincoln that actually had a little extra sitting room connected to the main hotel room, which was perfect, because we lugged in four boxes of gear and clothing that we needed to unpack and go through while we were here.  This allowed plenty of room to do that.  We also figured out that if we shipped some food up the trail four days, we could carry much lighter packs, so after lots and lots of strategy planning for getting through the Whites (cutting our daily mileage back to 10 miles per day), we went grocery shopping, and picked up a few odds and ends at the local outfitter.  We then came back, and repackaged all of the food, boxed half of it up, and took it to the Post Office to ship four days up the trail.  By the time we got done with all of that, it was almost supper time, and I really wanted to visit the hotel jacuzzi and indoor pool.  My legs were really sore, and my right knee was pretty angry at me, so I decided a soak would be a good idea.
I found the jacuzzi and soaked for longer than I wanted to.  It had a 15 minute timer on the wall, but it seemed like it was taking forever for it to end, so I finally checked a clock, and it had been closer to 30 minutes.  I went back and joined everyone for supper, and then we skyped with Elise and Daniel.  I just felt tired to the bone and wished we could have another true zero day to really rest and do nothing.

Posted by Keith and Linda Geraghty at 5:30 AM