I can't believe we are in New York, and I can't believe it's already July 4th.
We had an OKAY night at the ballpark.  There were a few noises that we were not used to, including fireworks being shot off occasionally, and we all slept kind of on the light side.  I really did not feel well, and ended up going to bed by about 8:00, and was ready to sleep much later when I heard the guys getting up for the day.  I knew I just had to drink, drink, drink, and make the most of it.
We packed up, and pretty soon, a policeman came by.  We figured he had heard that we were camping there.  He was really friendly, and yelled at us out the window as he waved and drove by, and asked us how we were doing.  We tackled that crazy mile-long climb back up the mountain first thing, before it got too warm.  Once we got back up on top, and back onto the AT, the trail actually was really nice and level, and wide, almost like a bike path for a while, and this really raised our morale.  I think the guys were feeling pretty fatigued from the day before also.  In addition to this, it had been quite a while since we had completely take an entire day off from hiking (a zero day), and I really think that was taking a toll on everybody.
We once again hit several hill tops with large boulders that the trail ran us over.  Once again, when we hit these, we were in really hot sun.  We reached a shelter that should have had a stream as a water source, but it was dry.   Then we reached Fitzgerald Falls, the only problem was, there was absolutely no falls - just a small trickle of water coming down the rocks - once again, no water. 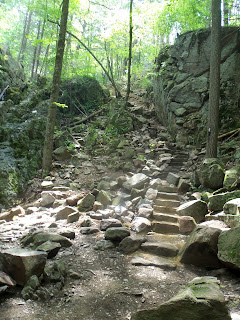 (That's the dry falls to the left of the stone steps)
But before long, we crossed a paved road, and bless their soul, someone had left gallon jugs of water for the hikers in the shade just inside the woods.  We were so happy to see that!  We filled up, and hiked on.  The rest of the day was really challenging with several vertical rock climbs, and multiple hill tops topped by large boulders that the trail passed over.  We came to another road with another stash of jugs of water left by another former thru-hiker, and once again topped off our water bottles.  We were more in the shade today than yesterday, and were doing some serious drinking, but still I could tell that I was not feeling 100 %. 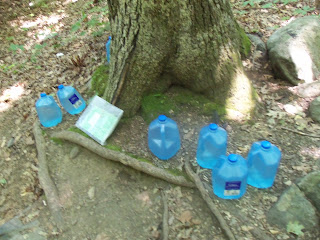 The really great news is, today is the day that Dania, Swamprat's wife, comes back to visit us, and she was flying in, getting a rental car, and coming to pick us up on the trail!  We finally made it to the road about 5:00, and Keith managed to get us a ride into the closest town, where we were delivered to a gas station so Dania could find us easier.  The nice man who picked us up said it had hit 100 that day.  We went in and got cold drinks and ice cream, and life got much better!  We were so filthy though, I really felt sorry for Dania having to be stuck in a car with us.  Within a short while, Dania pulled up, and whisked us away to our hotel for several nights.  We were staying in New Windsor, New York, and all needed rest and recovery.
That evening, after having a great meal, we went down to the Hudson River in nearby Newburgh, NY to view the fireworks display.  Unfortunately, about that time, a wicked lightening storm was passing through, and the fireworks were postponed.  We ended up just driving around, and eventually heading back to the hotel, just in time to see the fireworks starting up in the distance.  We were all too tired to really stay up much longer anyway.  Happy 4th of July, everyone!!! 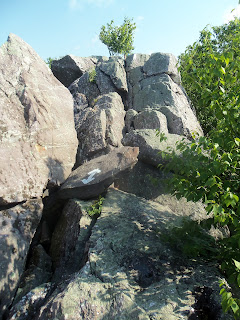 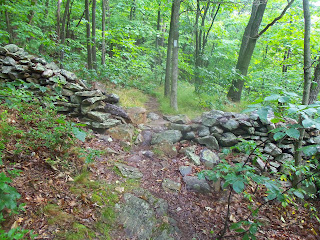 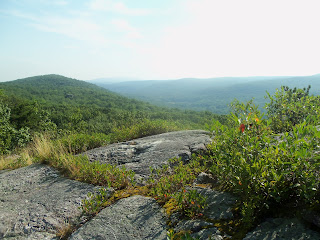 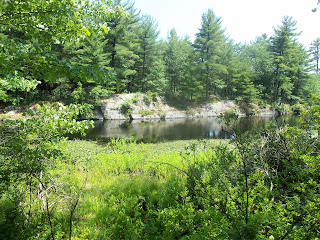 Posted by Keith and Linda Geraghty at 4:06 PM