If You Build it, We Will Camp

So, here is a clue to where we ended up camping tonight: 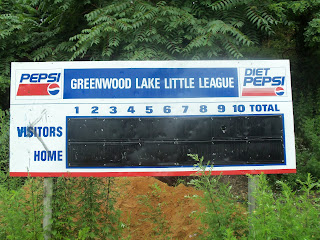 We really had a great variety of things on the trail today -- NOT just hiking through the woods!  Within a couple of miles of our campsite, we found ourselves hiking on a boardwalk that ran for about .6 of a mile over a swamp.  We also passed over a suspension bridge. It was really beautiful first thing in the morning, and well, didn't really look like a swamp at all - more like we were hiking through a large meadow of really tall plants.  Occasionally, a runner would come up from behind us.  You could tell this was their regular morning running route.
After the nice FLAT, LEVEL hike through the swamp on the boardwalk, where I swear I must have taken 30 or 40 photos, because it was so beautiful with the morning light,  we then headed up a really large climb, about 1000 feet up a rocky mountain.  A runner who was on the way down with his dog told me that two hikers at the top had already seen a momma bear and two cubs, so be careful.  I secretly hoped that I would get to see them, although I  am aware that this is not the safest of situations.  There was a small spring gurgling out of the ground about halfway up the mountain, and we paused to filter and sterilize some water.  It was so good, because it was so cold!  The clear, cold springs that we used to run into on a regular basis have now become few and far between, so we really enjoy it when we run across them!  We never did have that bear encounter. 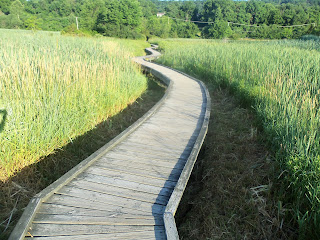 From the top of the mountain, which was named Wawayanda Mt., we had a really great view, and were told by another hiker that we could see clear to Delaware Water Gap, and also that we could see the monument that was at High Point State Park.  Once again, we paused to take lots of pics.  We continue to have great luck with great visibility when we hike to the wonderful overlooks. 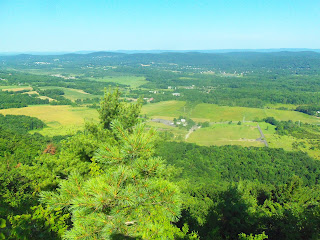 Just before lunch, we hiked into Wawayanda State Park, which was a seriously busy park.  There was a line of cars entering it the entire time we ate lunch at a picnic table there in the shade.  We were able to charge up phones and cameras in the Visitor's Center, and use their nice restroom and get clean water again.  The warm HOT weather had returned, and we were going through water quickly.  Also, we began to notice that the water sources noted in the AT Guide were oftentimes dry now - not a good sign.  This is the first time we had really had a problem with water availability on the trail.  We did pass some water and chose not to get it, because well, it just wasn't up to the standards that we were used to.  We were seeing A LOT of stagnant, discolored water, and so far, were passing it up, holding out for something better.  So far, something better has come along in plenty of time.
While we were eating lunch, we met a section-hiker named Roman, who had hiked the PCT two years ago.  He had lots of questions about our hike, and we were curious about his.  He was between jobs, and just out to hike a few weeks.  The problem was, last week, after only being on the trail two days, he had gotten dehydrated.  We certainly felt his pain.  The heat really takes a toll.
After lunch, we hiked on, and began hiking over a series of hills topped by large boulders - totally exposed to the very hot afternoon sun.  Not a good combination.  To make matters worse, the water sources we came to were either unsatisfactory or completely dry.  I was getting more and more fatigued, and could tell that the heat was getting to me.  I felt like I had taken in enough water, because I had paid attention to that, but for some reason, I was getting behind in the count on the water game.  While up on those hot rocks, we passed into New York for the final time, and found where the state line was marked on the rocks up there.  We had been weaving between NJ and NY for a couple of days, but had not left New Jersey behind for good. 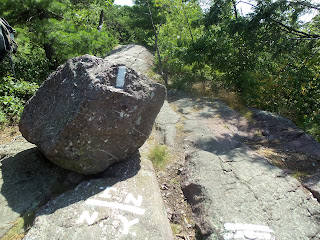 By about 6:00, we reached our destination for water, and it was bone dry!  We sat down and made a new plan, and had no choice but to hike down into a town that was about a mile downhill from where we were.  We had been seeing views of its lake from the top of the mountain, and it looked so beautiful - and so inviting in the heat - I seriously wished I was in that water - the town of Greenwood Lake, NY, was at least somewhere where we could find water, and hopefully we would find a campsite on the way down, so we could grab water, and then hike back out of town to camp in the woods.  The AT Guide did not give any indication of any camping in the town itself.
On the way down the very steep downhill, we saw absolutely no possibilities for campsites, and the way we felt with the heat, there was no way we were hiking back up that mountain before dark, so we hoped that the town would allow us to camp at the baseball field where the trail ended in town.  However, we saw a sign that said the park was closed dusk to dawn - not encouraging at all.  We hiked about a half a mile down to Main Street, and found a restaurant that a local said was good, and went in and had supper.  For the first time, I could not eat all of my food - only about half of it.  I just didn't feel well after our afternoon in the heat, and this was a pretty good indicator that things were not quite right with me.  I hydrated as best I could while there.  While there, we had a chat with a friendly local who heard our situation, and insisted that we camp in  his yard at his house.  While we all thought this was very generous, he was also on his way to play a gig with his band that night, and we could tell that we probably wouldn't get much sleep at his house, and we wondered how much sleep we'd get camped in the middle of a neighborhood (picture barking dogs).  We talked to our friendly waitress about the possibility of camping at the ballpark.  She said she would check on that for us.  By the time we were done, she let us know that if we needed a place to camp, we could use the ballpark without getting in trouble.  This was really perfect, because we had checked the weather report, and it was going to rain, and the ballpark had a covered pavilion.  We ended up setting up our tents under the pavilion, and while it rained that night, we slept nice and dry, and did not have to fold up wet tents in the morning.  As an added plus, there was actually a (clean) restroom that was unlocked, so we had plenty of water and a restroom available. 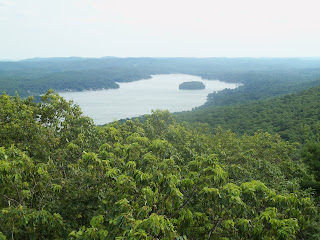 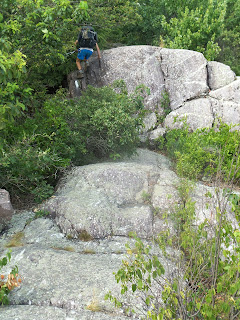 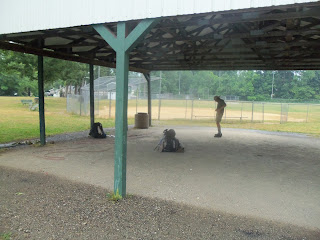 Posted by Keith and Linda Geraghty at 3:34 PM